Good news. It didn’t hurt as much as I had anticipated and I also still have a functional leg attached to my body.

My apologies that this progress post is a little delayed! In all honesty, after flying back home from Casper, the only thing I wanted to do for the rest of my 3-day weekend was absolutely nothing – and it felt great. Although I’m still waiting for my magic moment of no-pain, the trip was 100% worth it, and I figure it could be helpful to list out what I expected from the procedure vs. the reality.

Assumption: Fasciotomies treat and can fix the problem of compartment syndrome.

Reality: Fasciotomies treat a symptom of compartment syndrome, not the underlying problem.

The entire process with McGinley’s practice was the most educational brain dump of facts around PAES and compartment syndrome that I’ve ever had in my 10+ years of living with these conditions. One of the most interesting concepts I learned was that the actual cause of the pain and symptoms came from the muscles surrounding my artery + vein + nerve combo.

I’ll have to draw out a diagram at some point (I’m a visual learner), but essentially, there’s a small area behind the knee where your artery, veins and nerves reside. Muscles surround this area and as you become more active and continually grow additional muscle mass, the free space behind the knee gets smaller and smaller.

Think of it like one of those blood pressure armbands. As that thing gets tighter and tighter around your arm, there’s less room for your arm to operate freely. Can you imagine having that thing on, at its tightest level, for days and even years on end? Seems painful.

What causes the pain in compartment syndrome is not the inability for the fascia to expand with your muscles during activity (this is what I researched initially), but it’s actually the compression of the muscle on the veins and arteries. Blood is continuously flowing up and down your leg, but when the veins carrying your blood are smushed by a muscle, pain occurs because there’s a blockage of blood flow.

Therefore, cutting open the fascia only treats a symptom to help temporarily relieve the pain but it doesn’t help with the underlying problem: that there’s still not enough room in the leg for the expanding muscles to live harmoniously alongside the veins, arteries and nerves.

Assumption: I’ll need Botox treatments for the rest of my life.

Reality: Patients really do typically only need 2-3 treatments and are set for life.

You have no idea how relieved and excited I was to learn that the Botox is meant to be a permanent fix and an alternative to invasive surgery. Most patients (statistically) need 2-3 treatments in the same areas of the leg over a period of 2 years. 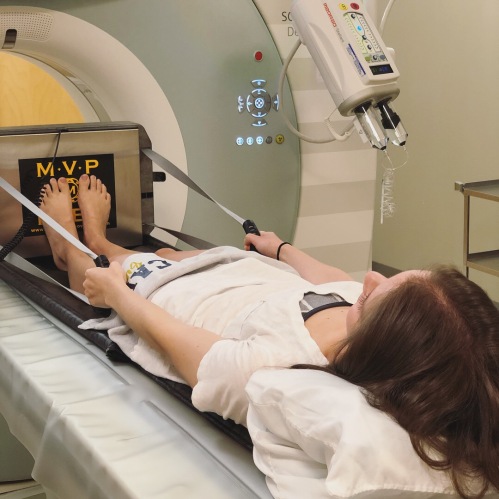 The ultimate goal is that the temporary muscle atrophy from the Botox uses muscle memory to prohibit additional growth in those specific areas of the muscle. Over time, your brain won’t utilize those particular areas, allowing less friction and more space for the arteries and veins to function normally.

Assumption: Dr. McGinley does the same injection locations for every patient.

Reality: Dr. McGinley gives the injections in the muscle compartments that need it the most.

Nope! After a series of MRI and CT-angiograms, Dr. McGinley is able to pinpoint the exact muscles that could use the Botox treatment. He then uses an ultrasound machine to guide the needles to the appropriate part of the muscle for treatment.

One awesome thing to note is that Dr. McGinley will meet with you to go through where the injections will go, how they will help and how much you need. For my treatment, we only did shots in my right leg (it’s the only leg experiencing pain) as my left leg’s artery was determined to be occluded for 1.5” back in 2010. After reviewing my CT scans, it was unclear whether Botox could help the left leg, so we decided together to table that treatment and focus primarily on my right leg for initial relief.

I really appreciated his honesty and guidance on that decision. I also felt like I wasn’t being pressured one way or another which is critical when making decisions for your body.

Reality: Yes, it does. But not as bad as the compartment pressure test.

I’m not the biggest fan of needles, but I survived. The nurses mentioned that some patients sleep through the actual injection process. I don’t think I’ll ever get to that level, but it was somewhat comforting to know that the needles he uses are only a size up from the tiny needles used for acupuncture.

For the deeper injections behind my knee, Dr. McGinley first inserted the needles in all three muscles prior to injecting the Botox. During this part of the procedure, your muscle may twinge a bit, but the Botox itself didn’t really hurt going in. The initial numbing injections were the most painful of the bunch!

Assumption: I wouldn’t be able to walk easily after the procedure.

Reality: I walked around downtown Casper and went shopping with my Mom right after.

It was probably part numbing medication and part excitement that I had survived the procedure that gave me the energy to walk around the tiny town of Casper. As the medication wore off, however, some of the pain did creep in.

It felt like I had just worked out. My muscles were a bit stiff and sore, but it was nothing compared to the typical pain I feel from the compartment syndrome itself! After shopping around town for a few hours, I did elevate my leg and nap the afternoon away. In the evening, I was too antsy to stay in my hotel and hobbled over to a local baseball game with my Mom.

All in all, I was still functional.

Reality: The Botox takes about 1-2 weeks to kick in.

This was probably the saddest reality of them all. I was hoping for immediate relief, but it actually takes about 1-2 weeks for the meds to set in. Dr. McGinley and his team will provide you with an exercise schedule that optimizes for really pushing yourself and your muscles during week 1.5-2.

Until then I have to wait for the pain to subside. I’m still feeling my compartment syndrome pain and I also have some random cramping in different muscles. That’s normal though, as other muscles in my leg are having to compensate for the loss of muscle in the injection sites. Sounds gnarly, but it’s not too bad.

I’ll keep the updates coming! Feel free to ping me with any questions, especially if this procedure is something you’re considering.

Looking forward to feeling like super woman in another week!